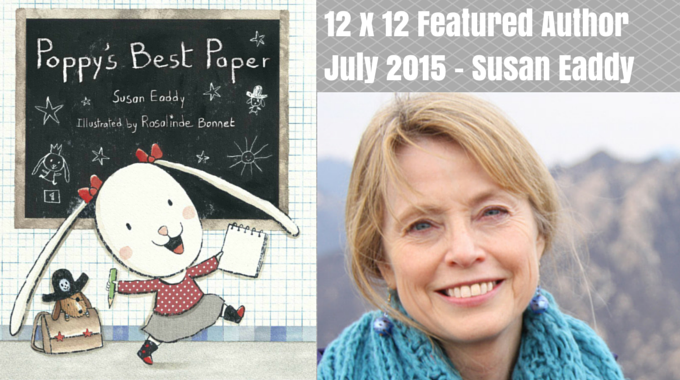 This month, I have the special treat of bringing you Susan Eaddy, a featured author who is both a dear friend AND the illustrator of one of my own books! So forgive the lengthier-than-usual introduction.

I first met Susan at the Bologna Children’s Book Fair three years ago, where she carried a few of her clay creations with her. I was fascinated by the detail and the downright gorgeousness of her work. I knew right then I wanted to work with her on a book one day.

So it was my great fortune that Susan agreed to illustrate MY LOVE FOR YOU IS THE SUN, because it is her stunning clay sculpted illustrations that make the book so special. I had a little bit of input into the illustrations, but truthfully, I just wanted to step aside and let Susan work her magic. And she did.

Interior spread from MY LOVE FOR YOU IS THE SUN.

Susan’s new book releasing this month, Poppy’s Best Paper, was one she planned to both write and illustrate. However, it turns out the universe had different plans, and Susan found herself on the opposite of the table –a writer handing over her carefully formed words to a different illustrator.

I asked her some questions about how it felt to let go of the idea of illustrating the book herself and the experience of being the “author-only” on a book. Not surprisingly, she went far above and beyond expectations with her post. Susan shares a lovely and inspiring account of the creative process, the importance of keeping an open mind and heart, trusting your instincts, and persevering.

When Poppy’s teacher asks everyone to write a paper, she is sure hers will be the best. Trouble is, she has tall ambitions, but is short on effort, and her jealousy takes over when her best friend’s paper is chosen instead. Poppy discovers that she has to get out of her own way if her big dreams are going to come true.

You are known as an illustrator, primarily for your books illustrated in clay. Did you ever consider illustrating Poppy’s Best Paper yourself?

I initially wrote this book in a college class I was taking with Robert J. Blake. (Akiak, Swift & many more…) Our assignment was to write and create a dummy for our own manuscript over the course of a semester. Yay for a deadline! I am so much MORE productive with them.  This story originated in my own elementary school class. It was my proudest moment when my favorite teacher read my composition aloud to the class.

Story first, sketches next; Poppy began life as a raccoon. When I finished the class I started submitting my dummy and EVERYWHERE I was told, “You know, I like the story, but the clay is just not working for me.”

I took that to mean that I was not doing it WELL enough, so I kept at it, revision after revision. Poppy went from blue to Tan… …then to some other transformations. Once again, Poppy went back out there for submission. I also took her to the Rutgers One-on-One Mentorship program where I was paired with the amazing Peter Catalanotto.

Peter told me… “YIKES! What is this??? This medium is just NOT working! Can’t you try it in something else… like watercolor???” (actually he was much more tactful)

I brushed off my brushes and rehydrated my watercolor tubes and started over. For 6 months. I tried Gouache too. Peter was so supportive and encouraged me to show him my progress… which I did. When he gently critiqued my watercolors, my bubble burst.

I began to DREAD going up to my studio to work on watercolor. I MISSED the clay and I asked myself,  “Why am I struggling in a medium that I don’t LOVE??”

So ONCE again. I decided I just wasn’t doing the clay well enough. This style was not popular either. Ugh.

By the time I submitted to Karen Grencik at Red Fox, in 2012, I was losing hope. Karen replied right away, with regret that this manuscript was not for her. I thanked her for her quick reply and quietly mourned. SIX hours later, I got another email from Karen saying… ( to paraphrase)

“I don’t want to offend you, but both Abi Samoun and I like your story and wondered if you would be willing to let another illustrator take a crack at it. Her name is Rosalinde Bonnet and here is her website.” I looked, I was blown away and I was UN hesitating. “Yes please!!! Take it! I can’t do another thing with this!!” How does it feel to have ANOTHER illustrator take over your manuscript instead of YOU?

Again, I am UN hesitating. It feels GREAT! It may be that if I had not tried every single thing I knew to do with this artwork that I may have felt differently. But I had tried, for YEARS and could not make it work. There comes a time in every stubborn person’s life that you must listen to what the Universe is saying to you, and I was more than ready to let this go. I was so lucky that both Karen and Abi had the vision to pair this manuscript with just the right person. Rosalinde totally GETS Poppy & has expanded and enhanced her quirky personality in ways I never imagined. I am thrilled and extremely grateful.

Poppy’s Best Paper is partially about writer angst in its many forms, procrastination, distraction, big dreams. In what ways does her story reflect your own writing process?

Well. Sigh. Like Poppy, I struggle with getting ahead of myself and letting distractions feed my procrastination. I have 2 primary motivators… Optimism and Panic. Both have a sunny side and a shadow side. The Optimism feeds my dreams, and keeps the hope alive which is completely essential for a late bloomer like me. But the shadow side of Optimism is thinking you can do it ALL and overcommitting.

And although Panic can keep you up at night, the sunny side is that it tethers my Optimism & keeps me realistic.  I never want to let someone else or myself down by missing deadlines, which I find to be an essential motivator.  It forces me to keep butt in chair  (or on my treadmill desk) and I have devised all sorts of ways to trick myself into resisting distractions by staying in one place long enough to accomplish something.

Do you still dream to both write AND illustrate your own book?

Yes. This IS still a dream of mine. I JUST have to create the perfect manuscript for the clay. Simple, right?

For me, dreams fuel ideas, and are absolutely necessary to sustain the hope and perseverance it takes to be a writer. Especially if you are a late bloomer like me, and that perseverance takes many years. While it took Poppy a few times to get it right… it took ME a hundred times longer and I think that WITHOUT the big dreams I couldn’t have sustained the effort. Again, for me, dreams translate into creativity, the drive to harness those ideas, and hope.

Susan Eaddy works in her attic studio writing picture books and playing with clay. She was an Art Director for fifteen years, and won international 3D illustration awards and a Grammy nomination. Her clay illustrated trade books include, My Love for You is the Sun by Julie Hedlund and Papa Fish’s Lullaby by Patricia Hubbell. She is the author of Poppy’s Best Paper coming from Charlesbridge in July 2015. She loves to travel and has used the opportunity to do school visits anywhere in the world from Taiwan to Brazil to Alabama to Hong Kong!